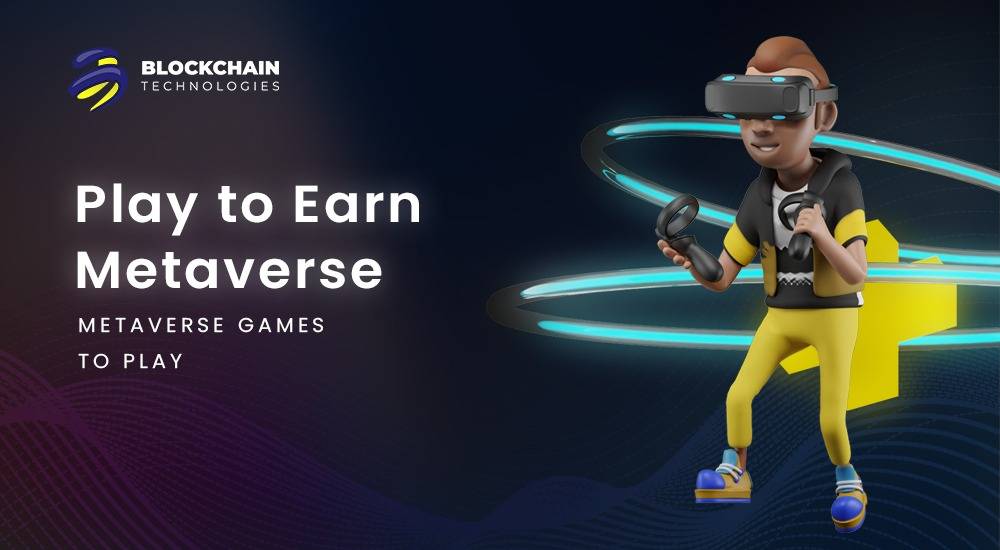 What is the Metaverse?

The metaverse is a jointly hoped concept for linked virtual environments powered by the integration of cutting-edge technologies such as blockchain, video games, AI, and VR/AR, which enable people to engage in relevant social relationships in digital spaces. The metaverse will replace today’s social media platforms with an interface like, leveraging virtual reality (VR) and augmented reality (AR) technologies.

Gamers can travel through a virtual world, walk around as their in-game avatars, and interact with other virtual inhabitants, which is known as the metaverse. The metaverse’s goal is to someday link all online worlds together, allowing users to move between them as if they were one.

Get Free Estimation for - Play to Earn Metaverse Game Development

How does the metaverse work?

The metaverse is a sub-reality within our universe that may be seen through early-stage platforms such as Decentraland, a blockchain-based digital world where users can own virtual lands and buy other in-game goods with a native coin called MANA. Non-fungible tokens (NFTs), which are one-of-a-kind cryptocurrency tokens that can be used to represent certain assets on a blockchain, fuel such technologies. NFT mechanisms are integrated into the in-game items of all blockchain games, including Axie Infinity, and The Sandbox.

As of now, the early-stage metaverse is dominated by gaming and cryptocurrency, two technologies that, when combined, become literal “game-changers,” bringing us closer to the vision of the future. Gone are the days when game developers were the only ones that profited, as the new breed of games now allows users to fully control their gaming assets and earn while they play.

Most video games have featured a centralized economic model in which creators and publishers owned all in-game economy goods and had complete control over how the in-game assets were distributed. If you possessed skins or other in-game objects, for example, the developers had the authority to allow you to keep them. You would have no recourse if they elected to shut down the game or remove any features that affected the item or skin you owned, and the item or skin would be lost

WhatsApp Us for Business Requirements - to develop P2E Games

What are play-to-earn (P2E) games?

P2E games are early-stage metaverse platforms with innovative economic models that allow players to earn a consistent income while playing. These games are usually blockchain-based, with users receiving rewards and incentives based on their platform activity or in-game achievements.

Users can trade Native tokens with another cryptocurrency for other assets on exchanges as they earn them through gaming activities.

Many games allow players to sell their assets if they no longer require them or if they have completed the game, ensuring that none of the player’s money is wasted.

What is the connection between the play-to-earn model and ownership?

Play-to-earn games rely on blockchain technology since you can earn products in the form of crypto tokens, non-fungible tokens (NFTs), and staking while playing the games. Many of these games will reward you with one of the digital goods listed above if you play for a long period.

In a specialized marketplace, you may also sell and exchange digital goods like land and weapons in the form of NFTs with other players. Because these objects would be tokenized, they would be one-of-a-kind assets that could not be duplicated, and the token for these items would be securely maintained in a distributed ledger.

Axie Infinity is a metaverse game in which players compete against one another by fighting with their pets, known as “Axies.” The game is based on the popular Pokemon property, and it follows an open-ended digital pet universe storyline in which players can complete individual and community tasks to win more rewards.

Smooth Love Potion (SLP) tokens, which can be exchanged for cash or other tokens, or used to breed Axies, are given to players by Axie. Axie Infinity also contains a native governance token, AXS, that entitles holders to vote on the platform’s voting functions, which influence the direction of game development, as well as essential protocol parameters.

The Decentraland ecosystem is made up of two main components: Parcels of LAND (ERC721), a non-fungible asset, and MANA (ERC20), a fungible currency that can be used to buy LAND and other in-game items. The Decentraland project began as a proof of concept on the Ethereum network. The researchers dubbed the first iteration of the proof of concept ‘Decentraland’s Stone Age,’ consisting of a 2D grid of pixels with the owner and color of each plot contained in the metadata. the team moved on to a mock-up of a 3D virtual world as they looked for ways to house the data on-chain and make each parcel accessible to its testers.

While playing a game where NFTs are an inextricable element of the in-game economy necessitates an active and watchful mindset, building and managing such a game necessitates much more. Approaching a company that specializes in designing play-to-earn games is a good way to make a big portion of your job easier.

We Blockchain Technologies with such experience would have a specialized ideation team whose duty it would be to work with you to develop the game’s basic concept. What started off as a hazy concept from you has turned into a plot for a forthcoming blockbuster game.

Our Blockchain Technologies engineers will work with you to construct the game using a precise plan that includes a lot of planning. They will assist you in deciding which stacks to employ and which databases to manage. After examining the availability of essential resources, the team to work with and the estimated time to complete the game’s development will be finalized.

The metaverse is a broad and all-encompassing idea that has the potential to connect the physical and digital worlds. As we establish this communal digital environment, blockchain gaming appears to be an interesting opportunity to onboard new people. Despite the abundance of P2E games currently available, more projects are projected to start in the future as new gaming models emerge.

You’re in luck if you’re still looking to make a move to earn money in the metaverse game but are having trouble understanding the technical side of things. We’d be delighted to assist!

We are Blockchain Technologies – Sydney and we know how to cover the technical side of crypto games as well as establish a viable economic strategy for the development of NFT games. All you need is a concept. Then we can finish off the rest of the work for you.