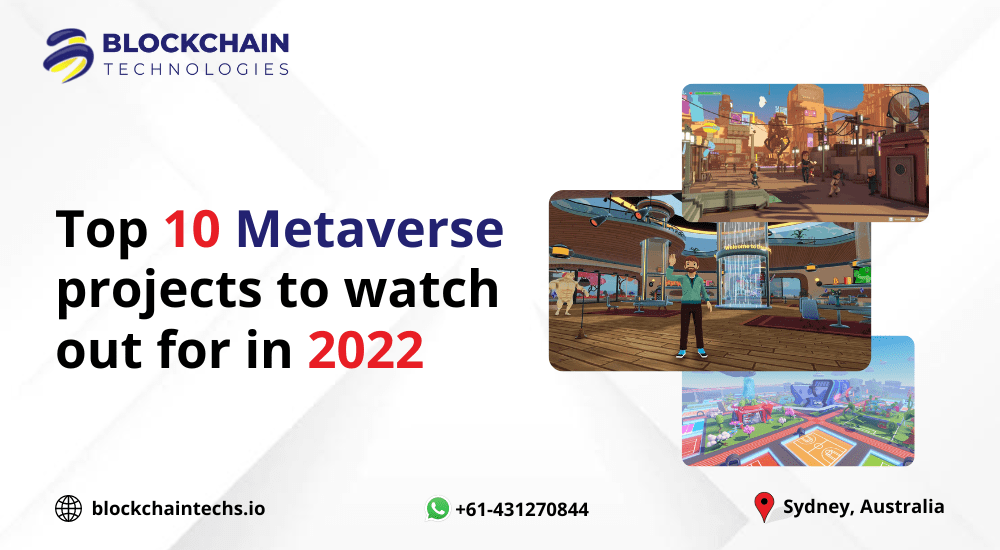 The metaverse is predicted to provide more to humanity and has the power to significantly alter the world we live in. This thought appears to have no expiration date. As technology advances, the metaverse will change in a variety of ways. Its market capitalization is predicted to exceed one trillion dollars in the future. Many of the market’s major participants had high aspirations for the metaverse and began to turn their focus toward it.

Let’s take a quick look at the top Metaverse platform for the year 2022 in this article. There is no way to express the metaverse in a single context. The metaverse’s application cases are mind-blowing even at this early level.

What is the Metaverse?

The metaverse is an all-encompassing digital universe where people, in the form of avatars, can interact with one another, go about their daily lives, and have similar experiences to those they would have in the real world. It’s simpler to think of the metaverse as a meeting of the physical and digital worlds, bridging the best of both worlds. We might also consider it the next step in the evolution of online social interactions, in which our social interactions will become increasingly more multidimensional, allowing us to participate and connect with people in deeper and more meaningful ways.

Metaverse projects are being developed by tech companies such as Meta, Google, Microsoft, and Tencent, all with the hopes of becoming a key shaping factor in this new digital universe. Heavy hitters have drawn out their wallets for the event, and the prize pool may be massive.

According to recent predictions, the worldwide metaverse industry would increase by as much as 40% in the following eight years, reaching a value of almost $670 billion by 2030.Mixed Reality (MR), Augmented Reality (AR), and Virtual Reality (VR) are gaining traction and popularity.

Decentraland relates to a virtual universe, which includes the entire metaverse, when it comes to virtuality in social contexts. Decentraland, a virtual digital environment that replicates the physical world, was launched in 2015. You may meet individuals from all around the world by attending online events, playing online games, and selling digital things in marketplaces. Decentraland was the inspiration for Animal Crossing. MANA can be bought or traded on major cryptocurrency exchanges such as Binance and others. The players control every virtual item in Decentraland. On the Ethereum blockchain, MANA can be utilized to create virtual property ownership.

Along with the many other benefits we’ve already highlighted, the platform has recently seen a greater integration of eCommerce solutions, making it a vital destination for advertising and marketing. As a result, in 2022, it’s safe to expect Decentraland to continue to flourish and remain at the top of the greatest metaverse initiatives.

Connect with Us Now

Sandbox isn’t far behind Decentraland as the second most popular metaverse cryptocurrency, but it has shown to be a considerably greater success in recent months when compared to Decentraland, with its native SAND coin skyrocketing close to 1,670 percent.

The Sandbox, on the other hand, employs the SAND virtual token as its native currency and is transferring to Polygon’s layer 2 solutions, which are noted for having substantially cheaper transaction costs and better processing times.

Sandbox isn’t far behind Decentraland as the second most popular metaverse cryptocurrency, but it has shown to be a considerably greater success in recent months when compared to Decentraland, with its native SAND coin skyrocketing close to 1,670 percent.

The Sandbox, on the other hand, employs the SAND virtual token as its native currency and is transferring to Polygon’s layer 2 solutions, which are noted for having substantially cheaper transaction costs and better processing times.

Gala is a blockchain gaming platform that combines the benefits of non-fungible tokens with the excitement of gaming to create a space where users may freely trade in-game products. Gala features a variety of blockchain-based games that are classified as social games that focus on forming connections between participants.

The platform aspires to take the game industry to the next level by giving players back control of their celebrity. Gala, to put it another way, is a gaming platform that is partially run and owned by its users. GALA, the platform’s native utility currency, may be earned through gameplay and serves as a medium of trade amongst Gala Games participants. Gala, being a blockchain-focused gaming platform, also allows users to play the game while using their own unique NFT characters.

MetaHero is a very new platform in which metaverse objects rotate and prominent 3D avatars of genuine people or objects are created using 3D scanning. In the metahero universe, a specially built scanning chamber known as Doha scans objects and creates avatars. This platform has a 450+ million USD market cap and is partnered with wolf studios and crypto HERO.

As if that weren’t enough, avatars may be customised with a variety of talents and abilities from classes such as Close Combat Specialist, Spellcaster, Mentalist, Enchanter, Elementalist, Range Combat Specialist, and Assassin. Players can level up their Recruits and trade or sell the NFT that fuels their accounts.

They’ve also teamed up with Wolf Studios and the cryptocurrency HERO, whose native utility token has a market cap of nearly $494 million as of the start of this year. Although it is not excessive, I believe it is reasonable given the fact that Metahero is a new concept.

The virtual reality game Star Atlas is set in the year 2620. Star Atlas features conquest, political dominance, and resource collection. SOLANA is the most valuable asset in the game. Solana is the “Ethereum Slayer.” There are no high gas costs or concerns with scalability. There are virtual ships, people, sites, and equipment. POLIS is the name of the in-game government system in Star Atlas. This may be a one-of-a-kind Metaverse to keep an eye on.

The first, ATLAS, functions similarly to a standard in-game coin, allowing users to do tasks like engaging battles and exploring different realms, as well as accessing the marketplace. This is especially significant because the majority of the game’s assets are NFTs, with only a few exceptions. POLIS, on the other hand, allows players to participate in what the developers call the game’s political intrigue.

Enjin is an ERC-20 token based on the Ethereum blockchain that is intended to be used as an in-game currency for purchasing game items as well as adding value to in-game assets. ENJ, the platform’s native utility token, can also be used as a medium of exchange for selling and buying in-game items.

Aside from that, Enjin’s platform offers another feature: a marketplace. This feature lets game players and developers exchange the things they’ve created on a marketplace without having to pay any fees to an intermediary. To put it another way, Enjin is a platform or service that allows game developers to easily issue fungible and non-fungible assets as Ethereum tokens in-game.

Highstreet is an intriguing idea with a lot of promise, at least in terms of metaverse usage. You may simply shop for products inside the virtual universe using its native utility token, HIGH, just like many others, and some Shopify sites are already connected into the game platform.

Floki Inu is another dog-based meme coin, but it’s a contender for a viable metaverse cryptocurrency, particularly for those looking for cheap coins. Elon Musk’s dog, a Shiba Inu, is said to be the inspiration for the currency, which is also the name of another crypto project!

The platform’s website claims that it will launch a game and an NFT marketplace in the near future, and that it wants to mix memes with real-world use cases. This is a still-in-development initiative, but that hasn’t stopped people from purchasing FLOKI tokens. Though the current market cap for FLOKI is not yet accessible, the currency has seen a dramatic gain in value since its inception in July 2021, with a 1331.53 percent increase.

Cryptovoxels is a Minecraft-inspired Ethereum-based metaverse. As a result, this metaverse is made up of a wide network of digital infrastructures and land blocks that users can build upon indefinitely. On OpenSea, assets can be traded for ETH, but Cryptovoxels also has its own currency, the Cryptovoxels Parcel (CVPA).

These can be purchased through OpenSea as well, and correspond to land in Cryptovoxel’s Origin City. As an NFT, users retain complete ownership of each land parcel, known as Voxels. Players can either develop or sell their virtual properties, which includes adding posters, banners, and music recordings.

Cryptovoxels, being one of the first metaverse initiatives, has managed to build a fantastic community that has only grown over time, resulting in ever more inventive and fascinating NFTs. As a result, Cryptovoxels is a project worth keeping an eye on in 2022.